As Australia emerges from the COVID 19 pandemic, there is growing evidence of the behavioural changes Sydneysiders have made in the way they live, work and shop; all of which is likely to have long term impacts on the city.

Even though restrictions have extensively been lifted, there remains a significant difference between life in Sydney now and before the pandemic took hold. Sydney has changed.

An analysis of commuting patterns, along with commercial and residential property markers, highlights the flow-on effects of increased working from home, which has become more prevalent following the pandemic.

Commuting patterns have changed dramatically. Whist there has been a recent upturn in people commuting, compared to before the pandemic, there are still around 19.6% fewer cars on Sydney’s major city access roads, while OPAL trips are down 14.6%.

This drop in daily commuters, is reflected in Sydney office and retail vacancies doubling from pre pandemic levels. Working from home patterns, as well as the inability to physically shop during the pandemic, has resulted in a structural increase in the e-commerce’s share of total retail spending.

This PAR Group’s analysis, undertaken by Damian Stone of Y Research and Rob Ellis of the Data App, examined changes to commercial property occupancy and yields, e-commerce spending, commuting patterns and residential transactions from pre-pandemic levels, to identify the impact of the COVID 19 pandemic on the way Sydney residents live, work and shop.

The table below outlines some of the transformations to Sydney’s way of life resulting from the pandemic and some of the ramifications on the property sector. 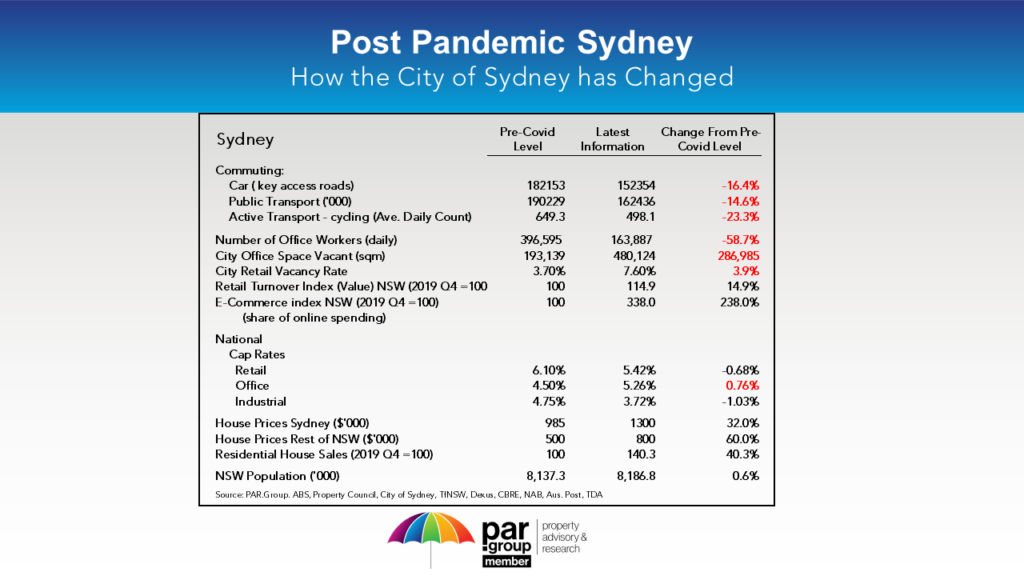 The long-term impact of COVID 19 represents a paradigm shift for commercial property in the city of Sydney. The way people live, work and shop has changed and it is unlikely the end game has even been reached.

The changes to commuting patterns have been dramatic, fostered by increased working from home. In spite of a pick-up over the past six months or so, Opal trips are still 14.6% lower than pre COVID levels. Similarly, while car usage, on key access roads into the city, has marginally increased, it is remains 19.6% down over the same time frame.

As a result of a smaller daily city workforce, office and retail vacancies in the city have doubled from pre-pandemic levels. City based retailers, which rely heavily on the daily office workforce, are having to deal with a significant drop in retail spending, which has been compounded by the increase on-line shopping. In spite of limited restraints, office buildings remain below 50% occupancy,

The current narrative revolves around getting office workers back to the city. The evidence, so far at least, suggests Sydney may also need to consider the scenario of fewer people working in the city than prior to the pandemic.

Previously, the city was, for many workers, the ‘destination of default’, as all roads and public transport led to the city. Given the broader choices involved in coming to a physical office now, the city and its office towers need to give office workers a reason to be there, retailers equally need to have a compelling offering to entice retail spending.

With the possibility business could be less central to the city going forward, the focus could shift to changing the makeup of the city. This could entail fostering more residential and entertainment uses, as well as international visitors (education and tourist). The creation of defined precincts, such as the proposed cultural and creative precinct south of the town hall, could be used to attract more people back to the city.

One simple change could be to Sydney’s branding. Being referred to as a CBD, creates the image of offices, a business district, not one of entertainment, nightlife or culture. Calling the city what is, the city, could help to more accurately reflect what it is, or would like it to be.

In the short term, it seems the focus needs to be on the role of the office post pandemic, as well as support measures for city retailers. If it is a case of encouraging people back to the office, actions to facilitate a return to public transport and incentives to encourage active commuting (walking and cycling) will be required. For example, some cities in Europe offer subsided bicycle purchases. Without some initiatives, the emerging legacy of the Covid-19 pandemic, will be fewer daily workers, with the result higher vacancy rates, particularly for secondary grade office buildings, let alone city retail properties.

Other research undertaken by the http://PAR.Group/ on the impact of the pandemic and e-commerce on shopping centres refer to the links below: