Quotes attributed to Rob Ellis, Director, The Data App
“Commercial retail transactions fell away through the March quarter. According to TDA estimates, both the value and volume of shopping centres transacted in the March quarter 2020 was the lowest for three years.”In spite of the seasonally-weak sales, typically seen in the first 3 months of the year, this will be a high-water mark in comparison to the June (and September) quarter, as the effects of COVID-19 start to impact listings, confidence and sales in the market.
“Cap rates trended higher in the first quarter of 2020, thereby partly revering some of the decline recorded through the course of 2019.”
“TDA calculate cap rates for commercial retail property assets were 6.54% in the March quarter; a rise of 61 basis points from the December quarter and 30 basis points down on a year earlier.”
“The price paid per square metre, while edging up marginally in the March quarter, has started to trend down and is now at its lowest level since the March quarter of 2017.”
“The commercial retail sector had been increasingly restrained by weak economic demand forces, namely negligible real income growth, restrained borrowing and the growing presence of on-line shopping.”
“If this was not enough, the coronavirus has not only resulted in income and employment imploding, thereby hitting retail demand further (with the exception of food and household spending) but has led to numerous retail outlets either temporarily or permanently shutting down.”
“So, despite compelling valuations, particularly compared to other commercial assets, with the impact of the coronavirus continuing to unfold, applying values to retail assets is a difficult, if not impossible, task. However, placed in perspective, listed larger retail stocks are showing implied valuation declines of circa 40%.”
“The confluence of increased vacancy through store closures and insolvencies, potential structural behaviour changes following COVID-19 and a weaker Australian dollar (resulting in higher costs) for retailers, is likely to further add pressure to underlying income for shopping centres. This, combined with higher funding costs and higher risk premia for investors, is likely to see a double impact on shopping centre values of higher cap rates applied to lower income.”

Note: Due to the nature by which sales information is disclosed, historical data is subject to revision. 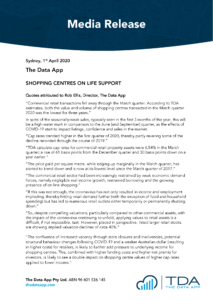