The Data App (TDA) estimate activity in Australia contracted again in June, with the second largest monthly decline on record and also means activity has fallen in five of the past six months. As a result of these contractions, nearly two years of activity has now been wiped out.

The Data App (TDA) estimate activity posted its third consecutive monthly decline in June. Following on from a, more modest, 0.2% decline in May, TDA’s monthly activity indicator (MAI) fell by 1.0% in June. As a consequence, the annual rate of growth of the MAI moved deeper into negative territory.

Compared to a year earlier the MAI is now 1.4% lower. With greater restrictions on employment and activity being imposed in Melbourne at the beginning of August, as well as a planned winding back in some support payments, it seems virtually inevitable the MAI will decline further.

With no official monthly measure of Australian activity available it is difficult to get a timely measure of how the economy is performing. In an attempt to fill this gap, The Data App (TDA) developed a Monthly Activity Indicator (MAI). The MAI is estimated using an econometric model based on a number of different, high frequency, monthly activity measures as key factor input variables. 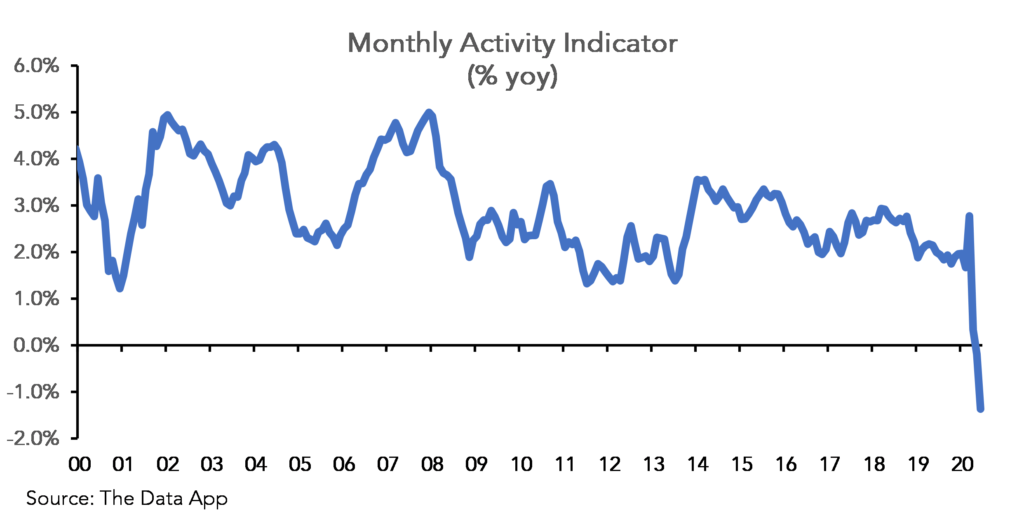 Key attributes of the MAI include:

The Data App (TDA) is part of the PAR.Group, an independent research collective. More information about the group can be found on the website http://par.group/