Over the course of the last two years or so, shopping centre transactions have boomed, aided by a surge in excess liquidity, both in Australia and elsewhere, boosting both real and financial asset values. This was also assisted by policy makers hammering interest rates to the floor.

As well as this, investor demand for “low risk” retail assets, such as neighbourhood shopping centres underpinned by Coles or Woolworths, and large format retail centres, anchored by the likes of Bunnings and Harvey Norman, helped to drive retail property cap rates to new cyclical low of 4.92% in the June quarter of 2022. Demand for these “safe” assets came from the whole spectrum of investors, as consumer spending patterns changed in response to the COVID 19 pandemic.

This PAR Group’s analysis, undertaken by Rob Ellis of The Data App, and Damian Stone of Y Research, considers some of the drivers behind the fall in cap rates and present some simple analysis and, applying some basic assumptions, show a potential profile for the future movement in cap rates.

Following the onset of the coronavirus towards the end of 2019, leading to lockdowns and government restrictions, spending patterns changed. On-line shopping, particularly for clothing and food, started to take a greater share of the spending pie.

In conjunction with working from home becoming more prevalent, city centre shopping centres experienced a significant reduction in inner-city footfall and turnover. The PAR Group estimated http://par.group/working-from-home-is-not-a-free-lunch/ if workers, on average, spent one day a week working from home, this could result in over $700 million of lost annual retail spending across Australia’s six largest capital cities.

Whilst some areas of spending were pared back, shopping for essential items boomed, leading to a strong appetite for, smaller, supermarket backed, shopping outlets. Furthermore, working from home resulted in greater demand for home-office furniture and equipment, thereby bolstering the demand for large format stores.

These spending changes resulted in a sharp divergence in cap rates among the various types of retail property assets. This dichotomy in yields was covered in http://par.group/the-great-retail-yield-divide/ and, the dominance of everyday need and large format transactions, contributed to the current cyclical low in retail property cap rates captured in the chart below. 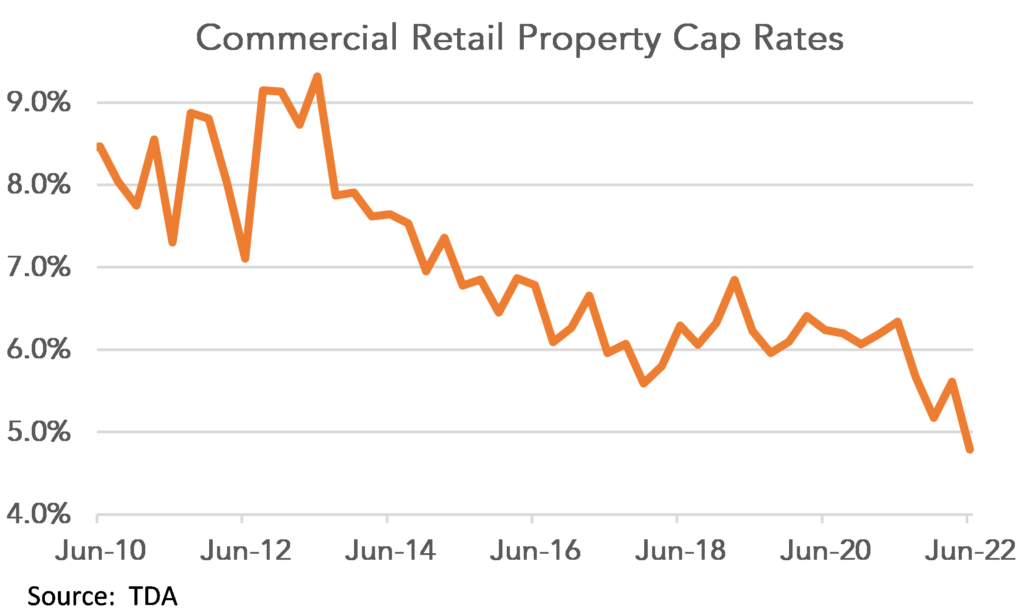 With the quantitative easing now being pared back, interest rates are rising along the curve, with expectations of more to come to help kerb inflationary pressures. Coupled with uncertainty over the outlook for the economy, as more covid variants start to emerge, the issue is how are cap rates likely to adjust to these economic conditions?

In order to try and uncover the likely movement in cap rates a simple equation was employed (see appendix below). Applying, what were considered consensus expectations to the equation, suggested cap rates would rise, on average, by a shade over 100 basis points in the following 12 – 18 months. This would take cap rates above 6% but, placed in perspective, would simply imply them returning to where they were a year earlier.

However, all retail assets are not the same and any increase in cap rates is unlikely to be uniform. With inflation rising faster than wage growth, real incomes are being squeezed and, coupled with higher mortgage payments, spending patterns are likely to be skewed. Spending on discretionary items will, more than likely, be squeezed the most, while expenditure on food and other staple items will be more resilient.

This likely spending profile, in conjunction with the continuing migration to on-line shopping, suggests sub-regional shopping centres will bear the brunt of softer spending and are therefore likely to post, larger than average, increases in cap rates. On the other of the coin, neighbourhood centres, which will benefit from their defensive non-discretionary spending statues, are likely to experience below average cap rates going forward.

This development points to the divergence in cap rates between larger and smaller shopping outlets being maintained or widening further. Furthermore, with construction costs rising, future supply additions are likely to be crimped and, with fewer neighbourhood centres, their asset values will be supported, helping to underpin their relative attractiveness.

As cap rates declined over the past year and real interest rates increased to their highest level since 2014, the implied risk for investing in commercial retail assets hit an all-time low by mid-2022. In other words, investors are receiving little reward for investment risk compared to history. So, considered from a different angle, unless cap rates increase, investors should expect an ever-diminishing return from retail assets.

So, while it seems inevitable cap rates will rise, it looks likely there will be a large and growing differential among various types of shopping centres, with neighbourhood and convenience centres continuing to trade on tighter yields.

Following the approach proposed by Henry and Mizon[1], the analysis used the simple unrestricted model for commercial retail asset cap rates to determine which variables have the greatest impact on cap rate movement. Initial regressions showed the volume of retail turnover proved to be insignificant. This may be for a number of reasons, ranging from (a) overall retail turnover does not impact cap rates, as some strong areas of spending could coincide with weak areas of spending (b) the dramatic swings in retail turnover over the past couple of years may have led to a breakdown in the relationship (c) a different measure of activity could be more appropriate e.g., value of retail turnover, GDP etc.

It should also be noted that the recent number of neighbourhood transactions, compared to regional centres is likely to have influenced the downwards bias on cap rates. Using a range of assumptions regarding the outlook for inflation and bond rates, the analysis estimated that cap rates are potentially likely to regress back to 6% by the end of 2023. The table below highlights the potential movement in retail cap rates over the next 18 months.

Cap rate projection, illustrated by the dotted line, based on consensus expectations.

[1] Serial Correlation as a Convenient Simplification, Not a Nuisance: A Comment on a Study of the Demand for Money by the Bank of England 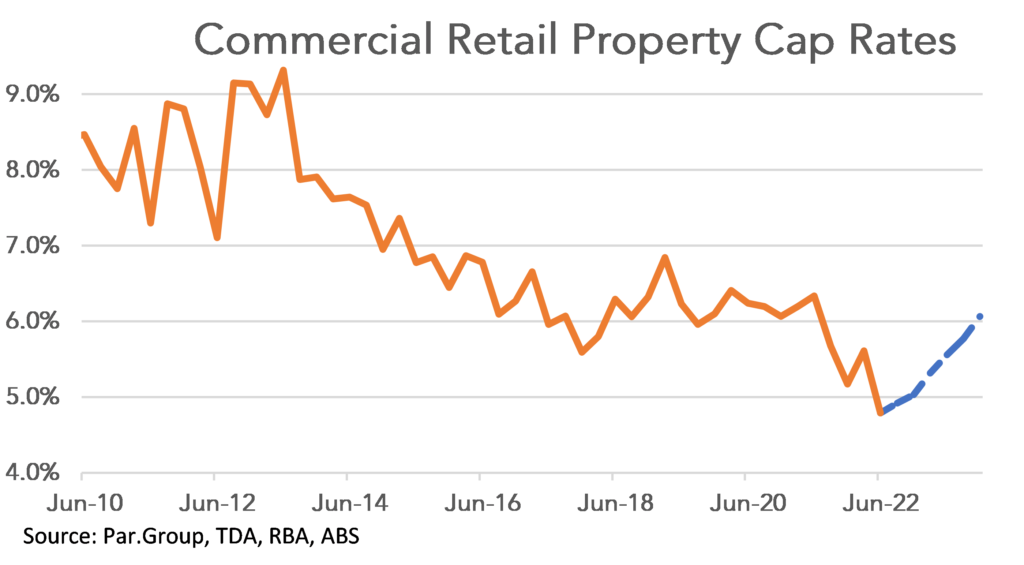 This note is for informational purposes and does not constitute any type of forecasting, business, trading or investment advice. All content, including estimation and data is presented with no guarantee of accuracy or completeness.