The rise of hybrid working and the increased uptake of on-line shopping, in the response to the COVID 19 pandemic, has had a profound impact on both office and retail property markets in Australia’s major capital cities.

Improved working flexibility, technology and less commuting have underpinned an uptake in working from home by Australian employees. The structural shift in the role of the city office and the 9-5 working model has created challenges for all capital cities across the globe. This shift has taken place despite numerous incentives and, in Australia at least, the return to the office appears to have stalled. While estimates vary, the evidence suggests, the percentage of office workers physically in the office will be well down on pre COVID 19 pandemic levels.

The future balance of working in the office verses at home is still unknown. To determine the possible magnitude of this change in working behaviour on city centre offices and retail centres, three scenarios were considered based on two years of monthly office occupancy rates, as defined by the Property Council of Australia.

It was found in the most optimistic scenario, around 440,0000 fewer daily office workers would be in the office each day, across Australia’s major capital cities, resulting in just under $1.6 billion lost in city centre spending per year. This is according to a new study by the PAR Group, an independent property research collective.

This study, not a forecast of the future spending patterns, but estimates based on three scenarios, thereby providing a guide as to likely environments.

The scenarios are, going forward:

For each of the scenarios, the number of office workers compared to pre-pandemic occupancy levels, was calculated. It was also assumed each office worker spent, on average, $15 a day in retail; representing the cost of coffee and lunch. Clearly, daily spending assumptions may differ, so the results should be viewed as indicative and reflective of different states of the world.

Applying these assumptions, the potential change to both the number of office employees in the major capital cities and retail spending was estimated.

The main findings were: 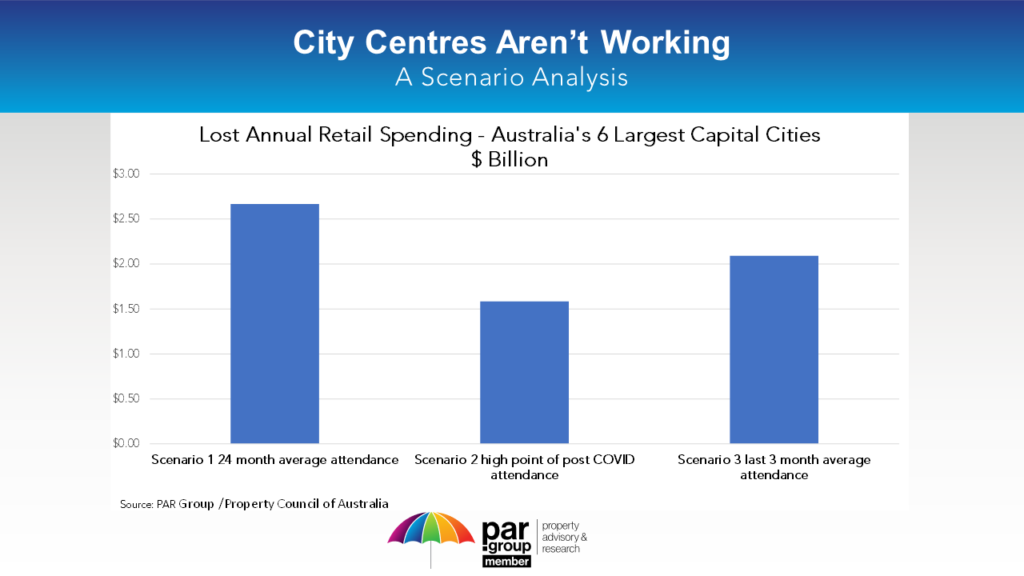 “Hybrid work, incorporating time in the office and working from home could become a significant legacy of the COVID 19 pandemic.

With social distancing and health measures now largely removed, and with a high proportion of the population fully vaccinated, the return to the office is increasingly based on the preferences of individual companies and their employees. Office occupancy data, both in Australia and elsewhere, suggests the return to the office has stalled and is currently between 50-70% of pre-Covid levels in many cities.

Even with cities currently with a high daily office occupancy rate, such as Perth, at 71%, there is a still a smaller daily office workforce. The mode of transport into Australia’s city centres has also changed, with public transport patronage down, on average, over 20% from pre-pandemic levels. Additionally, the standard office hours of 9-5, popularised by Dolly Parton, has changed with peak commuting hours starting closer to school pick up times.

Media reports have wavered between the death of the office and a return to “normal”. The narrative that is emerging, based on office occupancy trends, is the outcome is likely to be somewhere in the middle. The current rise in office vacancies, is being compounded by strong office supply, as well as a drop in demand. Feedback from stakeholders, such as workforce strategists, tenant advocates, leasing agents and property owners, suggests there is no clear trend emerging from Australia’s major office occupiers in taking less space in current lease negotiations.  While some companies are taking less space, due to increased working from home, some are taking additional space to create space for collaboration and social distancing. Planning for a reduced daily office workforce is an occurring trend, with an increasing proportion of new fit outs accommodating around 20% fewer workspaces than pre-COVID trends.

Consequently, it would seem, rather than focus on incentives to bring people back to the office, or employers strongly encouraging people to return, the discussion regarding the role of the city office needs evolve to planning for the potential long-term implications of a reduced daily office workforce and, with it, lower city centre retail spending.

It would seem, under the most optimistic outcome, government, office owners, retailers, employers and employees will need to adjust to city centres with fewer people compared to the prior to the pandemic. Those which adjust the quickest will likely be best placed to establish the model for cities which meet the future needs of workers and residents.”

Further research undertaken by the http://PAR.Group/ on the impact of the pandemic and e-commerce on shopping centres refer to the links below: