The monthly activity indicator (MAI) for Australia, after surging in July, slowed dramatically in August, as tighter restrictions in Victoria started to take hold and also impact on the broader economy. Following on from the largest monthly rise on record in July, the MAI moderated in August, rising by 0.8%. Even so, the annual growth rate remained in positive territory.

Much of the slowing in activity was driven by the moderation in retail sales and, while falling in August, remain some seven per cent higher than a year earlier. Partly offsetting the weaker retail turnover was a modest improvement in employment, while building approvals and business conditions detracted from activity.

Bolstered by government transfer payments, which have had a dramatic impact on retail spending, the MAI in August was 2.8% higher than a year earlier. Whilst Victoria is gradually emerging from its state of emergency, JobKeeper payments are being pared back. In addition, the six-month mortgage holiday, taken up my close to 500,000 households, has come to an end, with lenders now looking at the next stage of financial support. These changes are likely to crimp activity going forward.

With very little room to manoeuvre on the monetary front and the Australian dollar higher than officials would like, much will come down the Government’s fiscal measures. So, while the MAI has proved to be extremely erratic, in line with the monthly flow of economic statistics, a further moderation seems inevitable 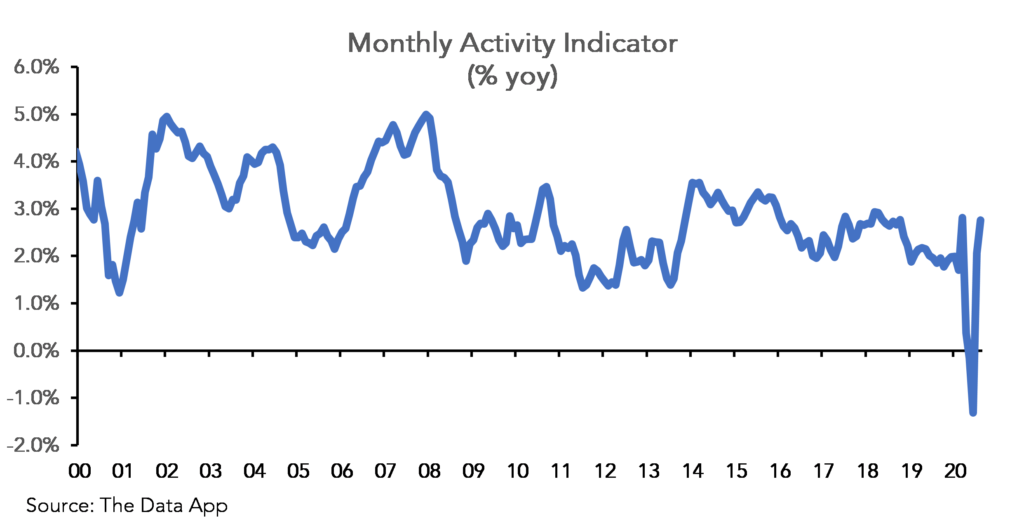