Although Sydney and Perth are separated by over 3,000 kilometres and have undertaken vastly different pandemic policy setting, there are behavioural changes which have become common to both cities. An analysis of commuting patterns, as well as commercial and residential property markets, illustrates the flow-on effects of increased working from home; a practice which has become more prevalent following the pandemic.

A major post COVID 19 change has been to commuting patterns. In WA, despite the lifting of compulsory mask mandates, there has been a significant drop in public transport usage. Transperth data shows patronage is down 35.6% from pre-COVID 19 levels. In comparison Sydney, where restrictions were in place for longer than Perth, and lifted in December 2021, public transport patronage remains down 14.6%.

In response to the fall-off in people using public transport car travel has risen 1.1% on Perth’s major city access roads, which represents approx. 5,000 additional cars per day. By comparison, Sydney car commuter traffic is down 19.6% from pre-pandemic levels.

Perth’s office vacancy rate has declined from pre-COVID 19 levels aided, in part, by leasing incentives and stock withdrawals. Even so, the drop in daily commuters, compounded by a structural increase in on-line shopping, has resulted in commercial retail vacancies increasing by more than 30% from pre pandemic levels. By comparison, in Sydney, the level of office vacancy and retail vacancy rates have more than doubled.

These results would indicate, despite vastly different pandemic policy setting in Perth and Sydney, working from home has become more of a working norm.

This PAR Group’s analysis, undertaken by Damian Stone of Y Research and Rob Ellis of The Data App, examined changes to commuting patterns, commercial property occupancy and yields, e-commerce spending and residential property transactions from pre-pandemic levels, to identify the impact of the COVID 19 pandemic on way Sydney and Perth residents live, work and shop.

The table below outlines some of the transformations to Sydney and Perth’s way of life resulting from the pandemic and some of the ramifications on the property sector. 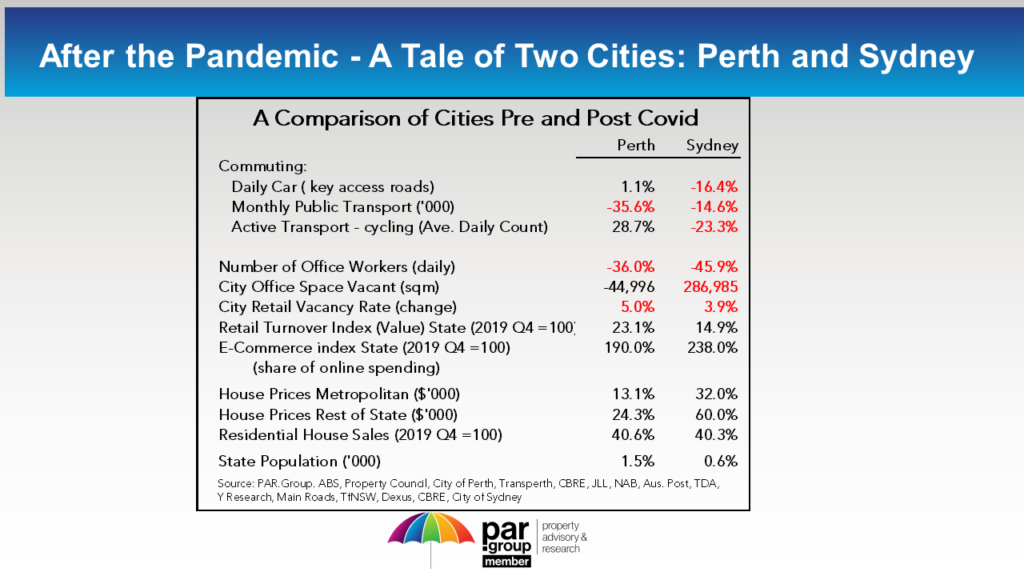 The long-term impact of COVID 19 not only represents a paradigm shift for commercial property in the cities of Perth and Sydney, but in Australia’s other major cities. The way people live, work and shop has changed and it is unlikely the end game has even been reached.

So far, the return to the office, widely predicted to occur once restrictions had eased has, so far, failed to materialise. Hybrid work models (for flexibility and business continuity), has resulted in only 63% of the daily office workforce physically return to their desk in WA, NSW is even lower, at 55%. City based retailers, which rely heavily on the daily office workforce, have experienced a significant drop in spending, all of which has been exacerbated by on-line shopping.  Consequently, the past year alone, Perth has witnessed a decrease in the number of food and beverage retailers, as well as bank branches.

The current narrative revolves around getting office workers back to the city. The evidence, so far at least, suggests Perth and Sydney, like the other Australian centres, may also need to consider the scenario of fewer people working in the city than prior to the pandemic.

Media reports note many major companies are evaluating their workplace options, with 20% of staff at a major bank yet to return to the office this year. Incentive programs such as discounted public transport fares, food and beverage vouchers, wellness efforts, and promotional events have yet to deliver the desired response from employees.

Globally there is increasing evidence that working from home, in some form, is here to stay. Previously, the city was, for many workers, the ‘destination of default’, as all roads and public transport led to the city. Given the broader choices involved in coming to a physical office now, the city and its office towers need to give office workers a reason to be there, retailers equally need to have a compelling offering to entice retail spending.

In general, businesses reliant on people leaving their homes to spend money for retail, hospitality or to live sporting events are not receiving the same patronage as in the past, with people less willing to travel for any reason. All of which is currently being compounded by rising fuel costs. The evidence in Perth and Sydney shows people have not swapped public transport for other modes of travel. Workers are largely moving around less.

With carrot laden incentives so far proving only partially effective, what could be the next steps? Will there be added incentives, or more of a stick like approach to encourage people back to the office? This latter tactic has resulted in some staff resigning, rather than returning to the office, with the ABS estimating 11.7% of professional services staff changed jobs in 2021, up from 7.4% in the previous year. Other suggested measures to revitalise cities have been public transport subsidies and office conversion.

With the possibility business could be less central to the city going forward, the focus could shift to changing the makeup of the city. This could entail fostering more residential and entertainment uses, as well as international visitors (education and tourist). The creation of defined precincts, such as the proposed cultural and creative precinct south of the town hall in Sydney and education around the new ECU campus, to be developed at Yagan Square in Perth, could be used to attract more people back to the city.

What does seem clear, irrespective of the restrictions imposed during the pandemic, there is a similarity in the outcome, increased working from home has become a way of life. To alleviate this, it seems the focus needs to be on the role of the office post pandemic, as well as support measures for city retailers. If it is a case of encouraging people back to the office, actions to facilitate a return to public transport and incentives to encourage active commuting (walking and cycling) will be required. Without changes, the emerging legacy of the pandemic, will be fewer daily workers, with the result higher vacancy rates, particularly for secondary grade office buildings, let alone city retail properties.

Other research undertaken by the http://PAR.Group/ on the impact of the pandemic and e-commerce on shopping centres refer to the links below: